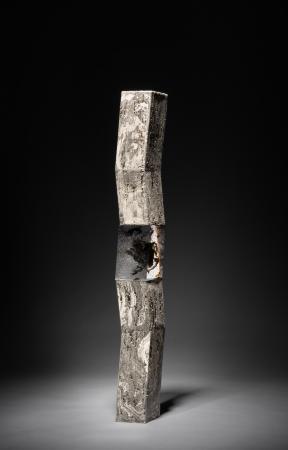 Waves of Ink: Painting in Porcelain

Joan B Mirviss LTD is excited to present a solo exhibition of new works by Kondō Takahiro (b. 1958), “Waves of Ink: Painting in Porcelain,” for this autumn’s Asia Week New York. Celebrated for his “silver mist” (gintekisai) overglaze, Kondō has created a new body of large and small works based on his continuing preoccupation with the 3/11 tsunami and its short and long term effects on the people and landscape of Japan. The mist technique takes on a new dimension as it covers painterly waves of dark black, gray and white embedded in slabs of marbleized (neriage) clay. An artistic break-though, this series marries his long-standing passion for painting with his mastery of the porcelain medium in sculpture.

Kondō Takahiro began his career in ceramics in 1985 after devoting his early years to sport, attaining national success in table tennis. His grandfather and father were blue and white-glazed porcelain (sometsuke) masters, and Takahiro learned much from them. However, he quickly discovered his own style and has continued to evolve, continually challenging himself, incorporating new media while remaining conscious of his sometsuke roots. Water has been his principal theme for many years and he has explored not only its physical forms such as rain, ice, steam, and mist, but also its conceptual aspects as a source of life, purifier, natural resource, and, most currently, as a critical environmental issue in regards to the nuclear disaster in Fukushima. These many manifestations of water culminate in Kondō’s patented silver mist overglaze, comprised of an amalgam of metals and glass frit, which ranges in appearance from a subtle shimmer to a stream of molten drops that are dazzling to behold.

The artist’s newest direction reflects Kondō’s lifelong interest in painting, incorporating application of his metallic glaze to monochromatic neriage slabs, appearing as “splashed ink” in the form of silver mist overglaze droplets. Although the patterns are abstract, the surfaces are intentionally reminiscent of seascapes in the tradition of Japanese ink painting (suiboku-ga). These surfaces are equally evocative on both his large sculptures and hand-held teabowls. They work in harmony with the pools of “ink” and suspended air bubbles in the cast glass covers of his “objets” and in the joining glass sections of his tall monoliths. For Kondō, whether it is through flowing of ink, drops of silver, or icy glass, his ceramics not only represent the ever-changing state of water as it travels through sky and earth, but also capture the fleeting nature of all things. The artist explains:

“My work embodies the concept of ‘utsuroi no bigaku’ or the art of impermanence. It is my intent to evoke that beauty found in the ephemeral through the waves and droplets on my surfaces that represent the cycle of nature, purification and rebirth.”

Kondō has received several international awards and been featured in exhibitions on four continents. Joan B Mirviss has represented Kondō Takahiro for over fifteen years and has placed his work in important international collections. Among major museums owning his works are the Metropolitan Museum of Art, NY; Brooklyn Museum, NY; National Museum of Scotland; Paramita Museum, Mie; National Gallery, Victoria, Australia; and São Paolo Museum, Brazil.
Joan B Mirviss is the leading western dealer in the field of modern and contemporary Japanese ceramics, and from her New York gallery on Madison Avenue, Joan B Mirviss LTD exclusively represents top Japanese clay artists. As a widely published and highly respected specialist in her field for over thirty-five years, Mirviss has advised and built collections for many museums, major private collectors, and corporations.